Weekends are for Flying Kites

We have been wanting to fly a kite and thought that our little boy would enjoy it. My husband bought a ready-made kite at Landmark Makati last Tuesday for for only Php99. It was a big one that has an airplane printed on it. Our son wanted to add googly eyes to it and call it a Pteranodon. He is fond of anything related to dinosaurs.

As the days go by, our little Kuya gets giddy as Saturday approaches. We promised him that we will find an open space to fly our kite on the weekend. It’s been raining since Wednesday and typhoon Gorio hit the country on Thursday. It’s been raining and a bit windy in our city almost the whole day of Friday. Saturday morning looked promising to me – it isn’t that sunny but it isn’t raining either. But, by the time my son woke up, around 12nn (we let him sleep in on weekends), it rained! We then told him that we cannot go outside. He suggested that we use an umbrella. I told him that we can’t fly a kite holding an umbrella. He must have prayed really hard because while we were starting on our morning routine, the rain stopped and the sun shone. My husband then prompted us to seize that opportunity so we all got ready to leave for the nearby Sports Center, which has an open field that is perfect for flying a kite. It was a good time for us because the field was nearly empty. People usually flock to that area very early in the morning to exercise, bike, and do picnics. They leave when the sun begins to shine at its hottest.

My husband quickly prepped the kite and the excitement began to build up. I was so thrilled to have my son experience flying a kite as I have never did it during my childhood. As much as I would like to be the one to run and tug the string, being 7 months, I opted to be the one to propel the kite into the air. In no time, the kite was up in the air and my husband maneuvered it so it would get higher and higher. Our son was so happy to see our kite up in the air. I asked him to tug the string for him to fully experience it. At first, he was scared to do so. Maybe because he remembered from his book, Curious George – The Kite, when the monkey was blown away with the kite. I assured him that it wouldn’t happen to him as he is heavier than George. 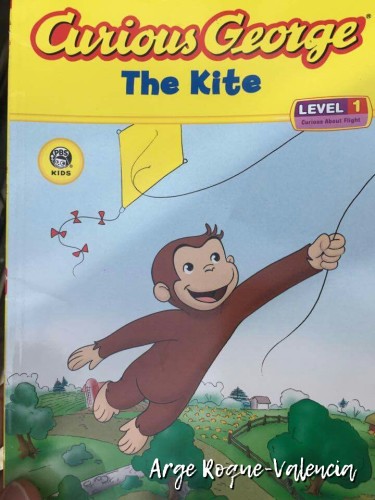 As the kite was already cruising up in the air, his Dad gradually put the string holder in his little hand. Our little boy tugged the string and ran a bit towards our direction. He was not scared anymore and I could tell that he enjoyed it. I tried flying our awesome kite and loved it. Too bad, the kite got tangled on the branches of a very tall tree and the string got cut off. It was beginning to be windy and we hoped for our kite to fall on the ground; sadly it didn’t. We just told our boy that we will buy another one that we can use on Sunday.

We bought a smaller Spiderman kite at Japan Home for Php66. We’ll see how it fares compared to our airplane kite.

Ladies and gentlemen, the Science Circus has come to town!

« Previous post
Week 37: Excited to be a Mom of Two
Next post »
Getting on the Road to a Fulfilled Life