When I first met the man, who later on became my husband, I was pleased to discover that he cared a lot about how he looks and smells like. Grooming is a priority for him. He may come from a long commute from work but he can still manage to look presentable and mabango. He wouldn’t just spray on any scent. It has to be something that is not too strong nor too sweet. It’s a plus point for me because I have allergic rhinitis and I couldn’t bear the smell of strong perfume neither can I tolerate the floral ones.

I am thankful for spending my life with a man who cares a lot about grooming as much as he cares about hygiene. At least I wouldn’t have to come home with Stinky Pete. In fact, he is more conscious about his grooming than I am with mine. He has regular trips to the salon for a pedicure every other week, a monthly appointment with his derma for a facial, sometimes with a diamond peel and a haircut with his trusted barber. I don’t find it vain for a man to engage in these habits. I consider them as essentials for everyone regardless of sex. Okay, may be a facial and a diamond peel are optional.

Kudos to whoever it was who coined the term “metrosexual.” Metrosexuals are indeed the epitome of modern men. They are not afraid to take on steps that would improve their appearance. They are bold enough to go to a salon and avail of services that previously, only women indulge in.

So, how do we preserve the metrosexuals aka The Modern Man? I’d say we encourage them to care about their appearance as much as they go crazy with cars. Stop teasing them about being vain whenever they purchase grooming effects such as Kojie.san Men. It’s a deo and spray which perfectly fits into a man’s utilitarian mindset. 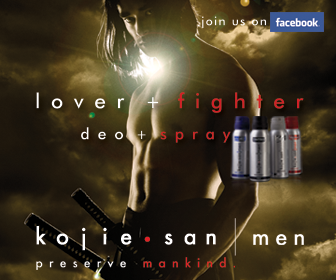 Visit the Facebook fan page of Kojie.san Men’s Club and find out how you can be man enough while making an effort to look good and smell nice.

This Expires on: Christmas Day