And enjoy every bite

In my previous post, I have let out the frustration that I felt with my task yesterday. By the end of it, I said that I would look for inspiring and creative sites to cheer myself up. I did found some when I Googled the keyword fashionably pregnant and came across these lovely websites: 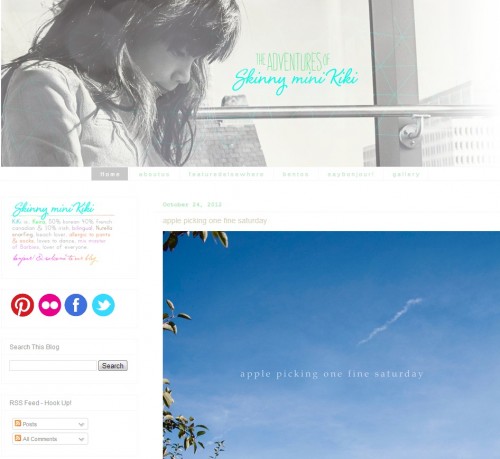 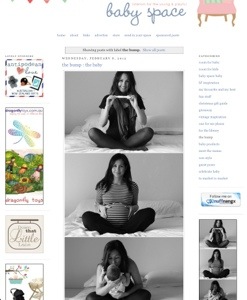 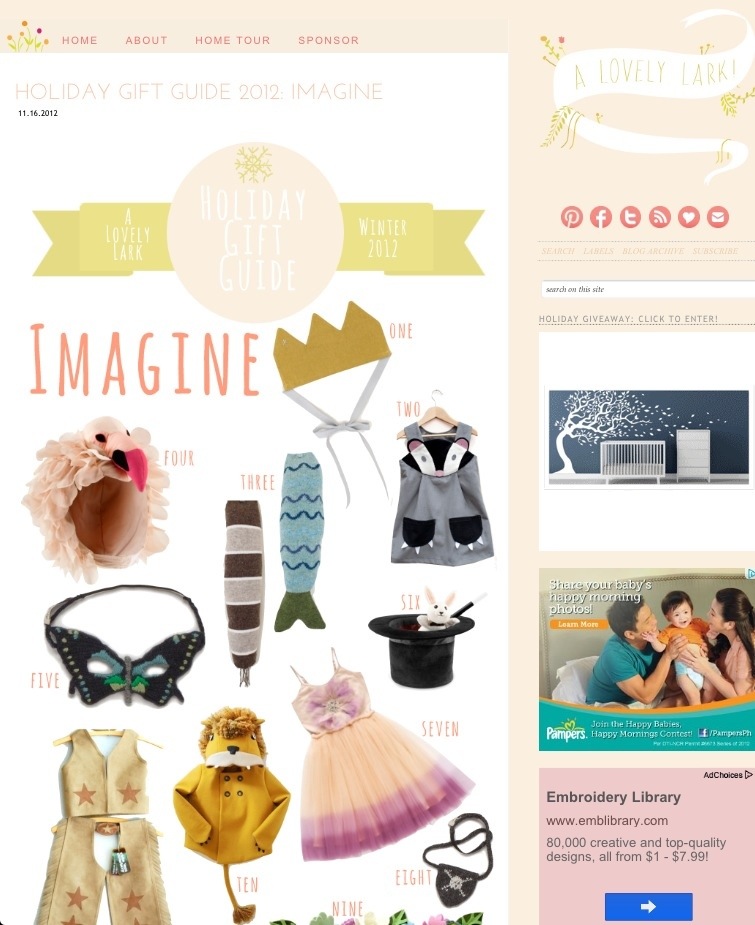 As a soon-to-be-Mommy, I was really delighted to visit these webistes. They are eye candies for me. The women behind these sites are young mothers themselves who simply adore their children. I wish I can be as passionate  and creative like them 🙂

Last night, while driving on our way home, hubby  told me about a minor glitch in his workplace. He said that it’s tough to do difficult tasks that a teammate can’t execute while managing his own workload. I cheered him up and told him that it only means that he’s really good at what he’s doing that he could take on other people’s task. He argued that it’s not easy because he is working on two different platforms and that it’s hard to shift each time.

Today, at work, I have a new responsibility and part of that is to manage social media accounts which were previously handled by a colleague. I don’t mind taking on hand-me-downs but the ones that I got this time are really messy. Though I appreciate that my boss trusts me completely in doing whatever I want with my new project, I still feel frustrated that I had to clean-up a lot of areas. Hay!

Now, I know how you feel, Honey!

I need to get this off my mind. My baby can feel the stress already. I’ll just browse/read on a few inspiring, happy and creative blog sites before I resume with the clean up. That would make my mood sunny again!

This Expires on: Our Monthsary 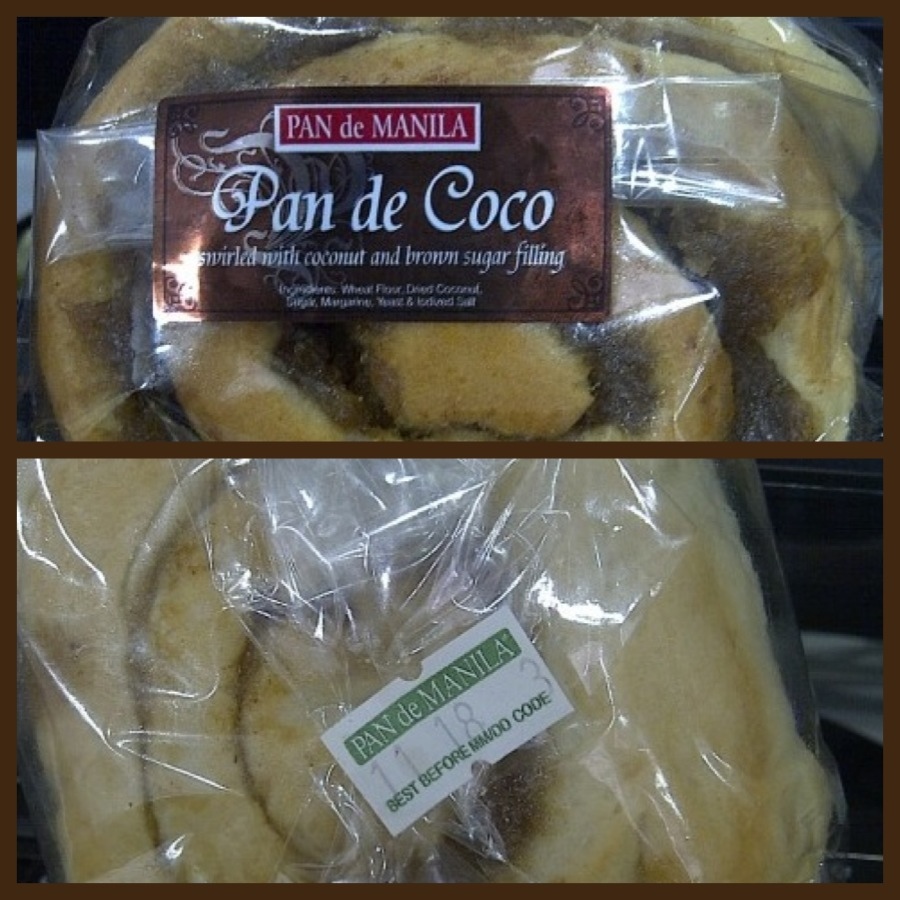 Yesterday, I bought two pan de cocos from Pan De Manila for our merienda. One of them expires on our 11th monthsary as husband and wife. 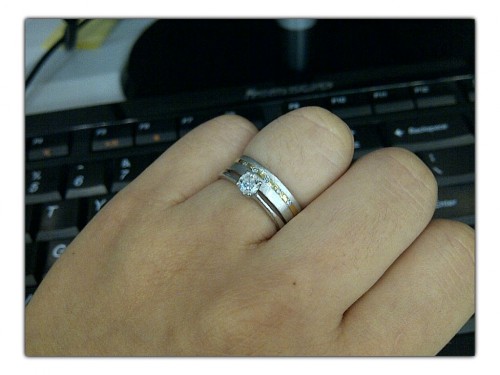 We were so tired yesterday that we collapsed in bed the moment we got home after eating dinner at my parents’ house. I barely had time to remove my rings. Now that I’m on my last trimester, I can no longer remove my rings without the aid of soap and water and lotion. I didn’t have the strength to exert extra effort to do it so I just wore them to sleep. So, since last night, I haven’t taken them off my finger even after I had taken a bath and washed the dishes.

This Expires on: Christmas Day 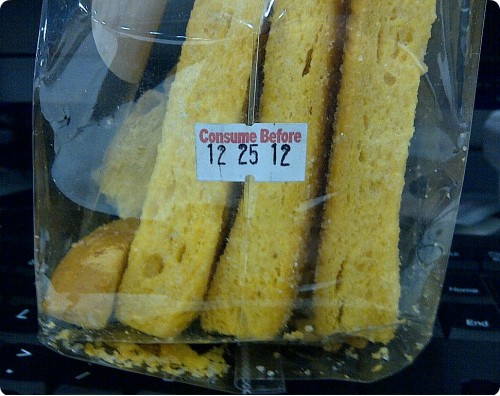 The perks of being preggy in the office! Coworkers always give me something to munch on. Today, a teammate offered to give me some biscocho from Tagaytay. I’m someone who always checks the expiration date of what I consume (food, meds, etc) and I noticed that this pastry expires on Christmas day.

Wala lang! I was just amazed 😉 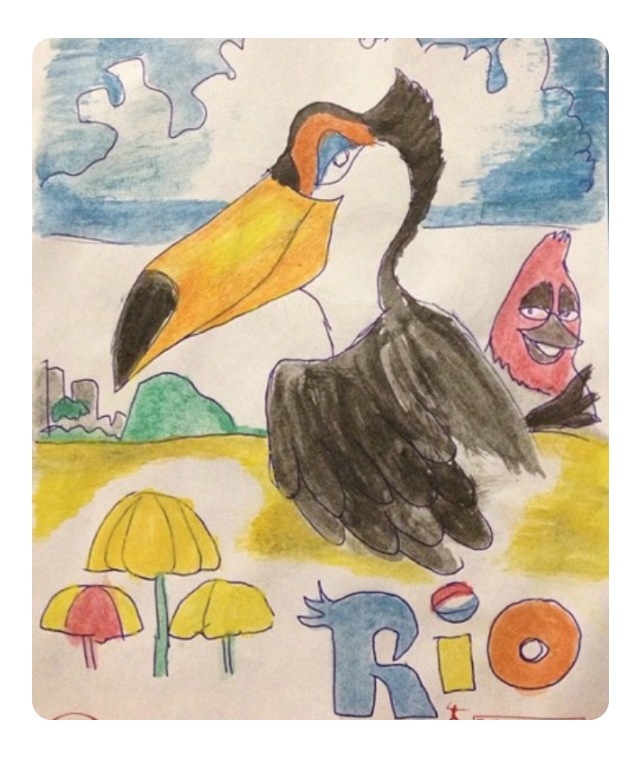 I hope our son gets to inherit my hubby’s gift of sketching.

Here, hubby copied a character from the hit 3D movie, Rio. He first sketched the bird using a black ball pen and did the colors using the watercolor set that we bought from the grocery that evening. When he was finished, my nephew and niece who were having an art session with him, were so amazed with his work.

I hope the kids would get inspired to play with their materials more often rather get hooked with the iPad, PSPs, and mobile phones. 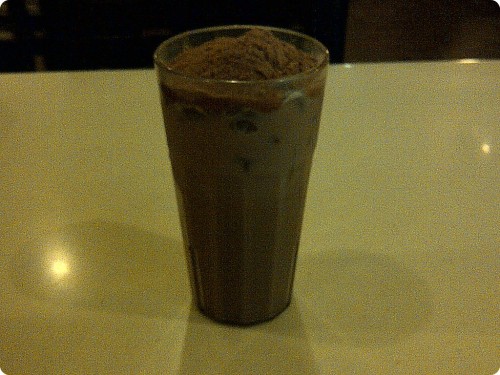 Had a much needed bonding moment with my good friends Che and Kat last Friday at Megamall. We dined at Orchard Road and I was able to enjoy a glass of Milo Dinosaur. I felt like a child at that time. I was so giddy when I saw it at the menu and insisted that I have it despite my friends’ protests hehe… 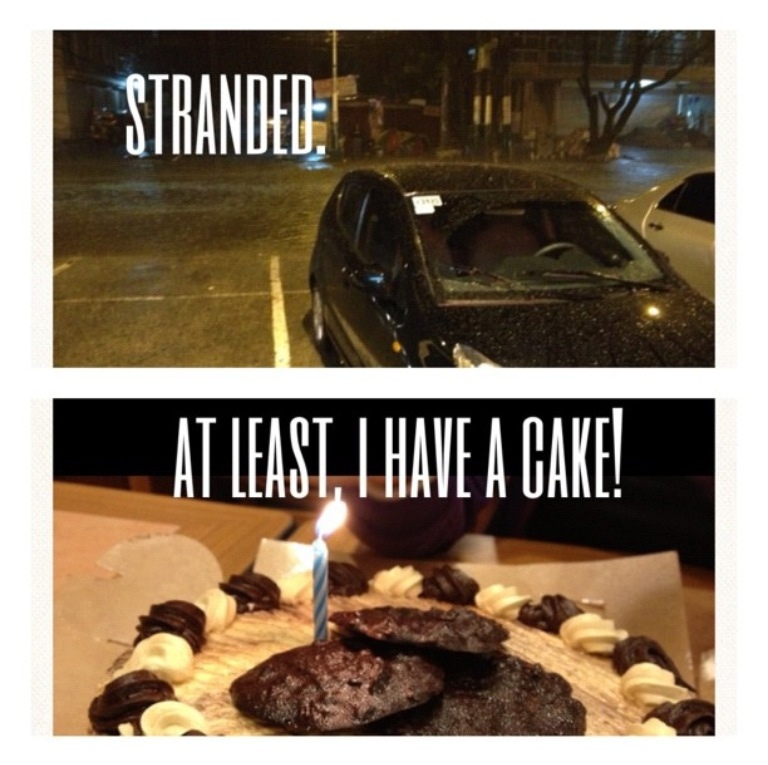 It was a stressful birthday for my hubby. He had a delay in renewing his license at LTO. The printer at the Ayala branch broke down and it cannot be fixed ASAP. The UAT that he was expecting at work didn’t push through that day. When we were about to go home, it was raining cats and dogs. The street outside the resto where we had a late dinner was even flooded.

It was a good thing that I bought him a birthday cake (though the icing to which my name was written already melted), complete with candle pa! I sang him a birthday song before our orders came. He smiled and was happy with my gesture.

When the flood subsided and we’re about to leave the resto, he posted that photo in Instagram. I was glad and relieved that after all the hassle that happened that, my husband was still able to enjoy his birthday.

This is an uber late post. Something went terribly wrong with the WP iPad app that I’m using. Finally, here it is!

We had a long day last October 20 but it was still relaxing and fun-filled.

Our day started with my routinary CBC (for monitoring my hemoglobin count) and the required oral glucose tolerance test (OGTT). We spent about three hours at the HP Diagnostics lab. That’s because there were several patients when we came in early that morning and OGTT takes a while to be completed. Thanks to everyone who prayed for me. The results are normal and my hemoglobin count has already increased 🙂

A little past 10AM, we were on the road for our car’s break in. Hubby named our car Levi. Take a look at the photo below and you will guess why he gave him that name 😉 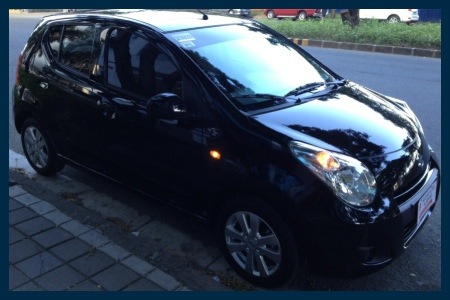 Since we were already late for the Sta Rosa and Tagaytay trip, we opted to have drive-thru Jollibee breakfast on the road. Traffic was a bit slow as we were getting near Paseo de Sta Rosa. We can feel the heat of the afternoon sun on our knees and arms as we drive along. By lunch time, we were already in Paseo and we scoured the outlet stores in my hubby’s search for a new pair of shoes. Sadly, the kind that he really liked was out of stock so we left Paseo and headed to Tagaytay.

Our first stop was at the Bag of Beans (BOB) . This is where we dined during our first year anniversary as a couple and when we came back with friends and hubby’s Kuya. Back then, they only have the one in Mendez. Now, they have a branch right after the rotonda. 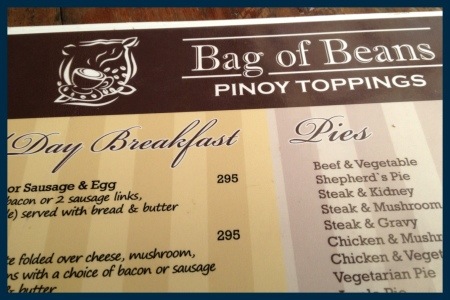 Since we were both hungry, we ordered big breakfast meals. I ordered chicken and pork adobo while he had tocino. Both were served with two sunny side ups and side salad. 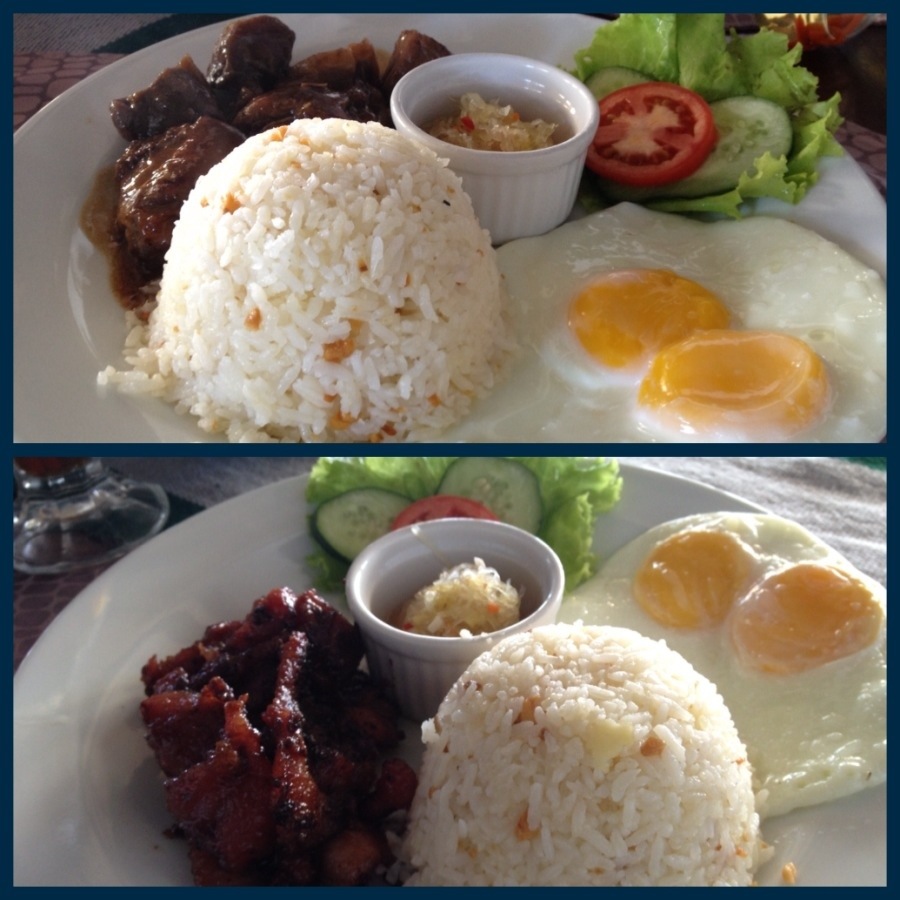 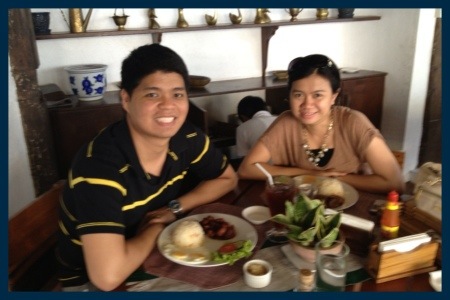 We’re both satisfied with what ate. After that, we checked out the adjacent Rowena’s pasalubong store and bought Sylvanas. We decided to buy the rest of our pasalubong loot at the market and the fruit stands.

We were able to test our car’s capacity en route to Tagaytay and back. We were able to drive at different speeds and varying traffic and road conditions. It’s been a long day but fulfilling and fun nevertheless.

I am blessed to have a friend who is going through (almost) the same season in life as I am. Though we rarely see each other, madalang pa sa patak ng ulan,  we can always talk about anything and everything about marriage, parenthood and anything and everything under the sun.  We have that instant connection with each other. We also find it easy to open up challenges that we can encounter in our newfound status. We are each other’s prayer partner and morale booster. 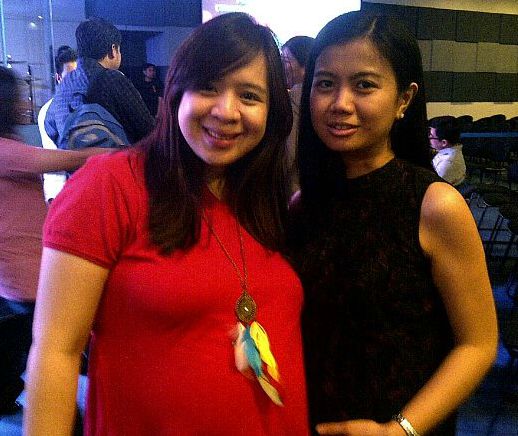 Here’s Dee during her last trimester and I on my first. She is now a doting and proud mom of Hannah.

We were in the same Victory group and our husbands were groupmates, too. Though we no longer do the meet ups, we still connect with each other through SMS and Facebook. I pray that we and our children remain friends forever 🙂