This may be late but I would write about it anyway.

We had a little celebration here at home last January 14 when Louiji turned two years old. It was a simple dinner with his grandparents, cousins and tita ninang from my side of the family. To make this milestone extra special even if we just stayed at home, I prepared food and decorations that I know will delight my little tot. I decided to have Louiji’s Favorites as our theme.

We served enough food for everyone to feast on. I baked a Red Velvet cake and a dozen cupcakes using the tips and techniques that I have learned from the Maya Cooking Class that I attended last year. I washed Louiji’s toys and made them as cake toppers. I also added a Happy Birthday washi tape and a #2 birthday candle. My parents volunteered to cook pansit for us, a recent favorite of our little one. My husband bought roasted chicken. I grilled liempo for the first time. I was so glad that they were not burned! I used the Jolly Lychees in Syrup and prepared chilled lychees mixed with nata de coco, an irresistible dessert for my husband. 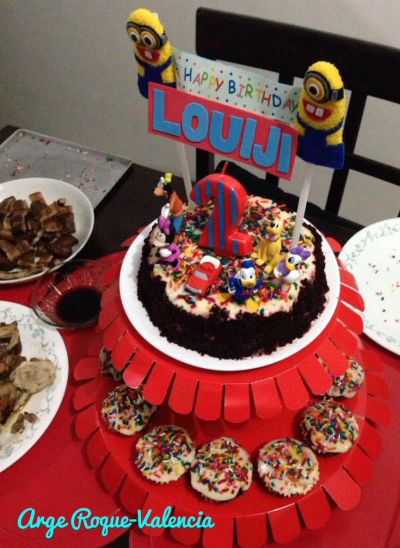 Earlier that day while our boy was still sleeping, I have put up the Happy Birthday banner that we used in his 1st birthday and added another one that spelled out his name. While he was taking his afternoon nap, I added more decors in the living room as inspired by the mood boards and magazines that I have created on Pinterest and Flipboard, respectively.   I gathered the balloons that we bought at Celebrations Party Central and added a string of yarn taped with a #2 cutout on each. I then asked my husband to tape the balloons on the ceiling to give the illusion that they are floating. 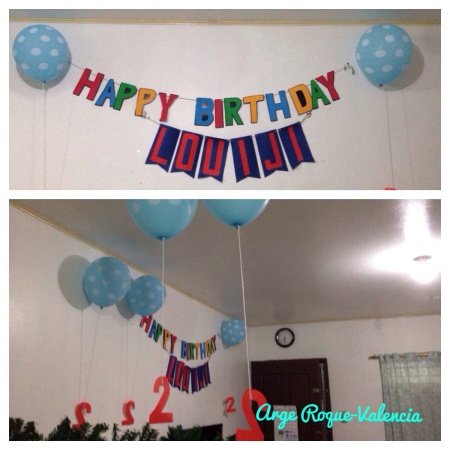 It was a bit late for dinner and our little one was still asleep so we decided to wake him up. As we were going down the stairs, everyone was singing the birthday song. I asked my niece to take a video of us to capture that moment. The look on our two-year-old’s face was priceless! He kept on pointing at the “floating” balloons and was happy to hear his loved ones singing. (Side note: A month before his birthday, we all have been singing the birthday song for him and it made him giddy each time.) Everyone gathered on our dining table and sang that happy song once more as we prepared Louiji to blow his birthday candle. At the end of the song, we helped him blew it. Everyone clapped and cheered much to the joy of our darling birthday boy. 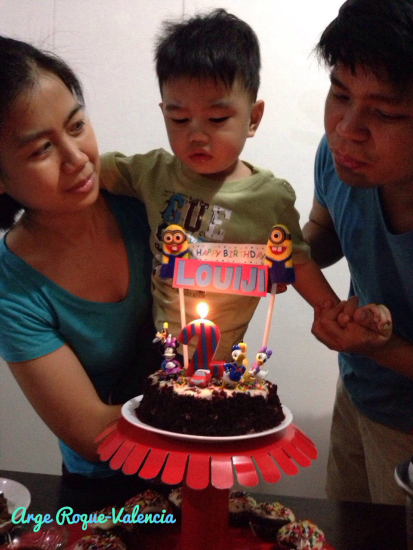 We watched Big Hero 6 on TV while having dinner. We were amused at how Louiji would laugh so hard at the scene where Hero was chasing Max. Some of the things that make our boy break into laughter really surprise us!

After dinner, we gave our gift to Louiji and his cousins gathered around us as I helped him open his gift. It was a train set featuring Percy from the animated TV show Thomas and Friends . My nephew, who used to be a Thomas and Friends fanatic in his younger years, helped us assembled the train set. Seeing how the whole thing worked made Louiji excited to play with his new toy. 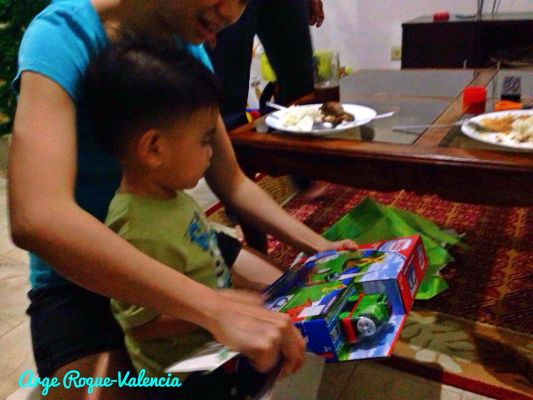 Soon after, our guests had to go home. When it was just the three of us, Louiji took out his tito ninong’s Magic Sing and prompted us to do a videoke. I obliged and sang a few songs for him while carrying him. He was getting heavier and I can no longer carry him for longer period of time. We then sat on the sofa and I gave him the mic. I could tell that he had fun singing 🙂 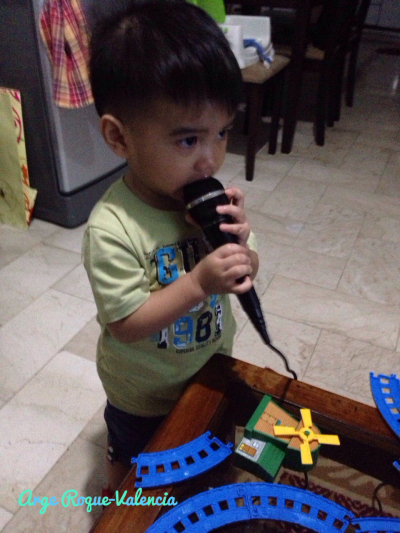 A couple of days later, we had a party for Louiji at Jollibee and celebrated with our relatives and friends. I will share about the party in another post 🙂