My First Ever Spaghetti Bolognese

I have noticed that my family and I have an affinity for sauces that tend to be on the sweet side. Whenever I would cook spaghetti, the sauce will always include the sweet style variety and a few teaspoons of brown sugar. That’s what I learned from my Dad, who cooks the best spaghetti ever. I would follow that formula each time and my spaghetti would also be a hit like his. On days when we eat out and crave for pasta, we are partial to restaurants that serve that kind of spaghetti. We could finish a serving in no time.

There was a time when we were staying at a hotel and I tried to avail of the room service. For a change, I ordered Spaghetti Bolognese.  I tried giving some to my son and see if he would like it. He liked it a lot that I didn’t have to chase him around the room to feed him. He would come to me each time he wanted a spoonful. He almost finished the whole serving! I was determined to look for the best Spaghetti Bolognese recipe so I can make one for him at home. I searched the web for a no-fuss Bolognese recipe and found one on BBC. I just used it as my guide and tweaked it a bit.  I substituted ground beef with ground pork, used palm oil instead of olive oil, and to make it more special for my little one, I added a can of Jolly Mushrooms (Pieces & Stems). 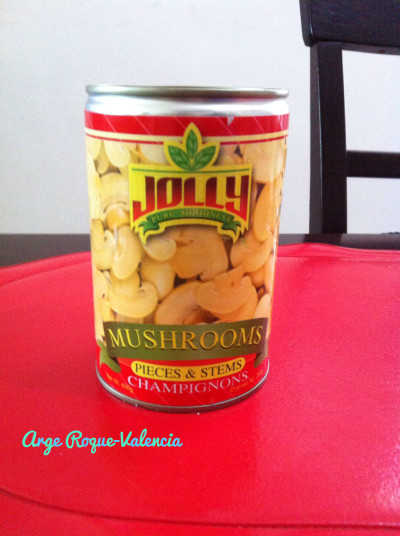 I have learned that the secret of this pasta recipe is to let the sauce cook very gently in order to achieve its richness. It was a test of patience (for me, at least) but it was worth the wait. Our little kitchen was filled with the aroma of this tomato-based pasta sauce! 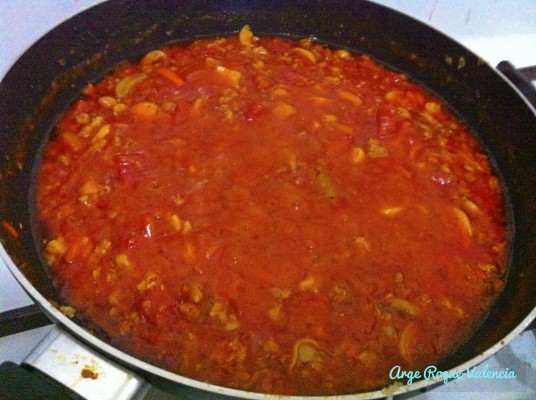 Because it was my first time to cook a different kind of pasta sauce, I was a bit nervous if The H and our little one would like it. To make this pasta dish more appealing to our son, I served it on his favorite Lightning McQueen bowl which is part of the Starter Set from Melawares. When he woke up from his nap, I told him that I made something for him.  I then offered a spoonful to him and waited for his reaction. He asked for another  and another until he finished everything in his bowl. I was sooo happy! When my husband got home from work, I served a plateful of Spaghetti Bolognese for him and I was glad that he liked it, too 🙂 My hardwork paid off! Another successful kitchen adventure 🙂 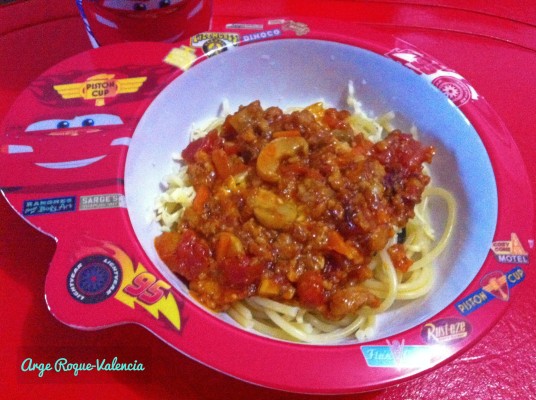 Here’s the recipe for my version of the Spaghetti Bolognese, with my alterations. This is how I did it. You may use the recipe below as your reference but adjust the ingredients or steps according to your preferences 🙂

Steps:
1. Heat a medium-sized saucepan over medium heat. Add a tablespoon of palm oil. Saute garlic and onion. Add ground pork and cook until browned.
2. Add in the chopped tomatoes, minced carrots and mushrooms. Add water gradually. Add salt and pepper according to your preferences.
3. Simmer for 30 to 45 minutes over low heat or until the sauce thickens.
4. Pour over a plate of spaghetti and serve.